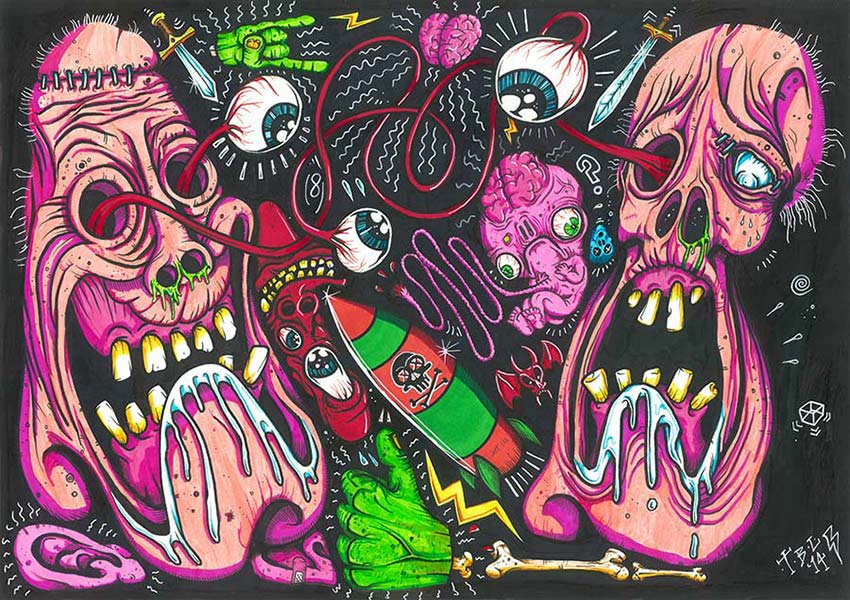 Over the coming months, Badornament will be bringing you interviews with our resident and guest artists. To start us off, we threw a few questions at Nottingham artist, The Brown Lazer.

When and how did you first become involved in creating art?
I’ve always spent hours drawing; as long as I can remember. When I was at school, I used to create these disturbing little one off comics and swap them for lunch money. I went to art college and got turned off by the pretentiousness that was abundant. [After that] I didn’t do any drawing or anything for a while, and concentrated on making awful music instead. As I got older and into other stuff, I started to make flyers for punk rock gigs and stuff like that.

What are your key influences?
Earliest artistic influences would probably be the awesome work of Bisley and Oneill from 2000AD, among others. The detail and stuff they put into those comics was truly inspirational to my tiny mind. That got me into art and engaged me far more than The Dandy (although I did bum the Dandy too). Also Ren & Stimpy, old horror movies and record covers. I did used to love looking at Bosch and Dali books when I was at art college, so that probably had a subliminal effect. More recently I suppose Adventure Time and Uncle Grandpa cartoons.

What artistic plans do you have for 2017?
I’m working on more comics: A biography on the short noisy shit stained life of GG Allin for one and a Sci-Fi oddball thing called “Glenn Benton Vs The Psychic Space Worms”. I’m also starting a tattoo apprenticeship at [Rebel Base Tattoos] (link https://www.facebook.com/rebelbasetattoos/ ) in Tuxford, hoping to turn my passions for drawing strange stuff and my love of hurting people into a full time profession. It’s a cool place set in Gosh! Art Gallery, with some rad and totally tubular cats.

Packs of wolves have recently been reintroduced in the wilds of the Yellowstone National Park. What wild animal would you introduce to Britain and why?
Ostrich, so we could all go round like Bernie Clifton.

Watership Down author, Richard Adams sadly died on Boxing Day, 2016. Earlier that year – during an interview published in The Guardian – Adams said, “I do not believe in talking down to children”. As parent who is also the creator of slightly disturbing, what are your thoughts on exposing children to art that shows the harsher realities of life?
I think it is fine. My art in particular has a cartoonish quality that makes the violent and disturbing content kind of comical; my kids just think that Dad sits in the shed drawing things that are a bit weird. I think kids can process things like monsters in films better than most adults. As long as you don’t show them stuff that will literally scare the shizzle out of them and give them nightmares. I watched many age inappropriate films in my childhood (Braindead, Basketcase, Bad Taste, Terminator, Predator, Alien, Hardware, Maniac Cop) and I turned out alright… I reckon.